Restoration of the Spirit

I've slowly been learning to expect the unexpected on my research trips, and here is my favorite story from genealogy travels this year.

While visiting Michigan in August, I made an unplanned detour to visit the Mt. Avon Cemetery in Rochester, MI and find the grave of one of my favorite subjects of interest these days, namely Jacob Summers, 1787-1864. We already have pictures of the Summers obelisk, but I always like to look around the area for clues that can't be seen from an internet photo.

So I scoped out ahead of time where to find the oldest graves in the cemetery, but much to my surprise, a number of cars and people were there when I arrived. I was puzzled because I thought it unlikely that somebody recently deceased was being buried in the oldest section of the cemetery. And besides, the people mulling around the graves were not exactly dressed for a funeral. So what was going on? 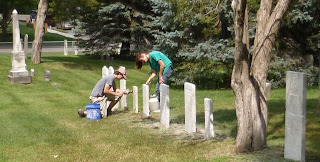 It took my brain awhile to register what I was witnessing:  gravestone restoration in progress. Broken stones were being plastered back together, and stones that have been blackened with years of lichen and soot were being cleaned, and I mean whitened! I was flabbergasted.

I immediately went to find our Jacob Summers to see if his obelisk had been done, but there it stood, rather darkened and leaning to one side. I found the person in charge to ask if Jacob's obelisk was in the queue to be cleaned, but he wasn't sure because the list of graves to be restored came from the city clerk. Well, it took me about 30 minutes to find a computer and WIFI to send a note to the city clerk to ask about Jacob's obelisk, and by the end of the day, I had confirmation that Jacob's obelisk was indeed to be included in the effort.  Yeah! 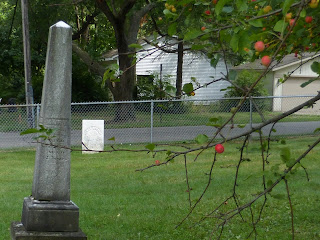 So it has taken awhile to get the post-restoration photos, but it's all been worth waiting for. I wish to bestow giant kudos upon Dave Carter at Carter's Cemetery Preservation, Lee Ann O'Connor, city clerk for the City of Rochester, and the citizens of the Rochester community. What a wonderful service has been paid to the past, present, and future to preserve the memory of our Michigan pioneers and settlers in such a way. We can all be proud of such efforts to honor those who came before when turning ourselves to look ahead. 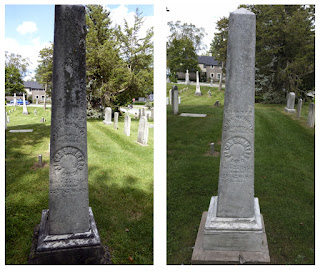 Posted by genealojist at 2:01 PM